“and what seems to bee the matter, young lady?”

moving on from yesterdays B movies back to serious business, maybe. Maybe there B more B torritorB to explore ?????????.,,.,.

“It’s serious. Like a really big Bee you know”

I remember hazily one sultry Sunday afternoon many noons ago, at home on the carpet. A film starring Michael Caine, that movie legend, what is he doing now? He’s doing ‘The Swarm’ (1978)

This came out during the Height of Caine’s career amongst films like ‘Beyond The Poseidon Adventure’ (1979).

Following this heady spell the viewing public had to wait a full 8 years before his next gem ‘Jaws: The Revenge’ (1987), one of my all time favourite movies, you could say it surpasses the original. Especially that flawlessly shot finale… but more about that later.

other Bee movies of mention including ‘The Bees’ (1978)

Starring buff film actor John Saxon from ‘A Nightmare on Elm Street’ and ‘Enter The Dragon’ fame and another John, John Carradine, father of all those other Carradines.

and of course there is…

This must win the prize for best bee based cover ever. Starring Suzanna Leigh, goddaughter of Vivien Leigh and best pals with Sharon Tate. 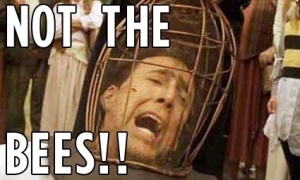 sorry, I couldn’t resist it.